The data you have captured with CFRAD2.exe or other programs can be postprocessed with python or excel. First we will process it with excel to give you an idea of the procedure.

In the capture example we have given 2 result files; nrad29 is was captured as the dish was pointed to the source, and nrad180 was taken 12 hours later, when not pointed to the milkey-way as a reference. Two example data files measured with an 80cm dish can be downloaded from here;

To have a look at it you can open it in an editor; we use free "editpad light". The 2048 values are the bin values of successive frequency bands. Also you see that the decimal seperator is a dot. Excel in some countries wants to see comma's, so to change that go to edit, select all, now go to search, and click prepare to search. In the left bottom corner two windows are visible; put in a dot left and a comma right. Now go in the search tab to replace all; done. The list is still highlighted, now; rightclick copy. Startup excel and click on the left most colomn and right click paste. Do the same for the second file; the reference file; nrad180.

If you insert a graph now and plot the two colomns you will get a passband curve. We can correct that by making a third colomn where we divide colomn A/B. Next, in colomn C we amplify the graph and subtract a constant value to bring it into the window. Now you can insert a graph, and it would be similar to the example.

This is a result with all the spikes and interference still present. You can make it look better by averaging bins, for instance by summing 3 cells, dividing that by 3 and putting the result in the middle cell of the next colomn. That also can be done for 5 cells. In this way there is no creeping. Also you can repeat that calculation a number of times. Of course there are more ways to improve the looks of it. As a first rule you can say that it is not likely that the next cell has an amplitude more than 120% of the previous one. You can also state that a cell cannot have an amplitude more than 150% of the maen value of all the cells. It is up to, and can be done by the user to post-process his own data, without being limited by a preset frame work of a program.

This excel postprocessing is ideal for schools and people starting with data processing. The downside is, that in excel it takes a long time to manipulate and to calculate. Even macros won't help much.

Python is a free platform used in scientic and universities. It is fast and has the feel of old "Basic". The version used by us is Python-xy and can be found here https://code.google.com/p/pythonxy/wiki/Downloads; install it. Included is the an editor called "Spider".

Next download the plot script from here; cfrad-plot-NL version   This script was modified specially for the two files; when you run it save it to the same folder as the two nrad files are in. When you run it you get this result first: 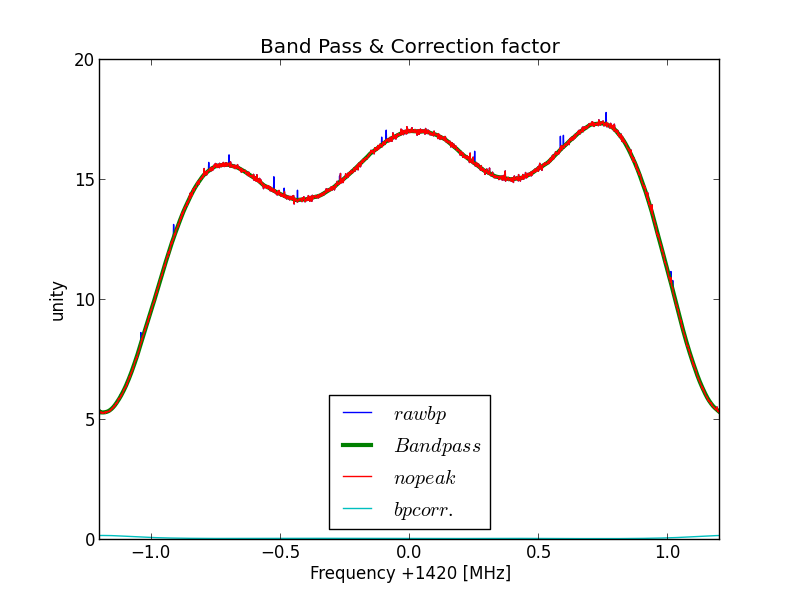 And some details where you can see that the anti peak function is working. 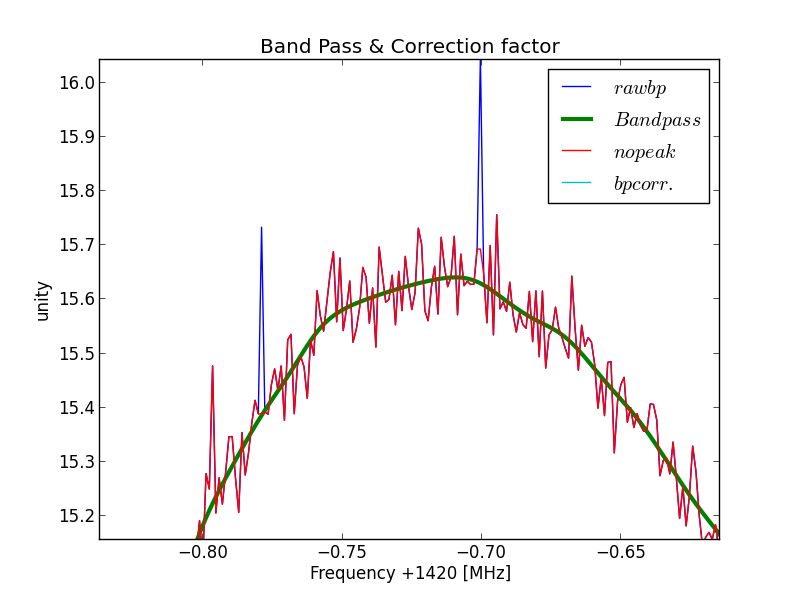 This is the function we will use later to correct the received signals with. 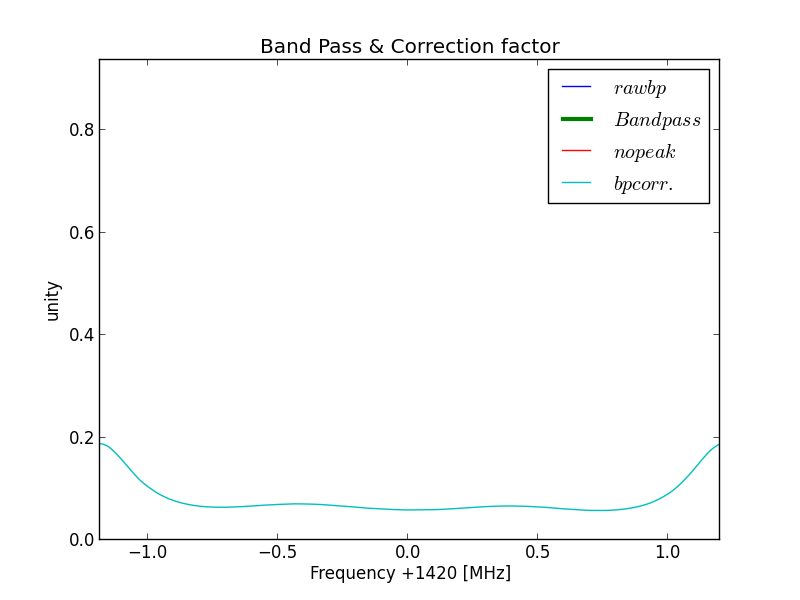 You can zoom in on any part of the graph by selecting the fifth icon from the left. When you are done, you can click the X in the right upper corner. The script continues the program and halts to display the "selected 5 minute" measurement. It gives thesame result as the A/B funtion in excel. Now we see the actual hydrogen line curve. 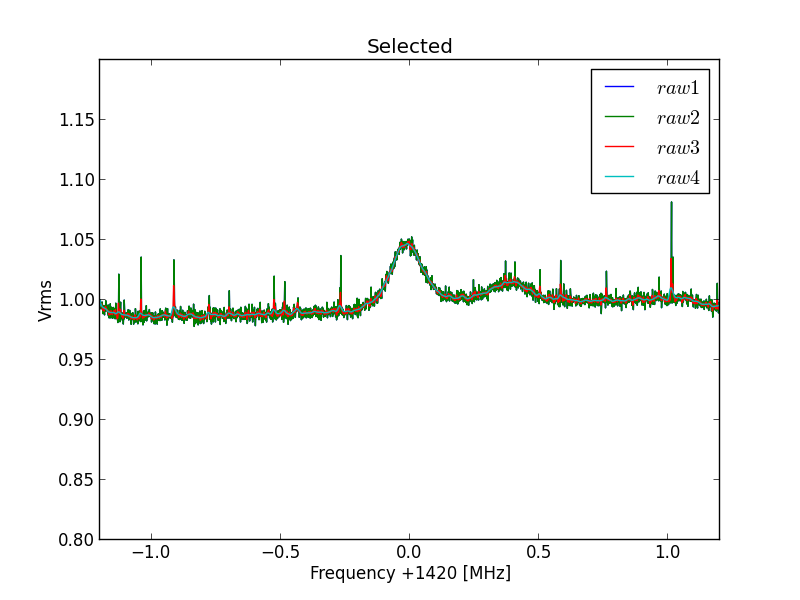 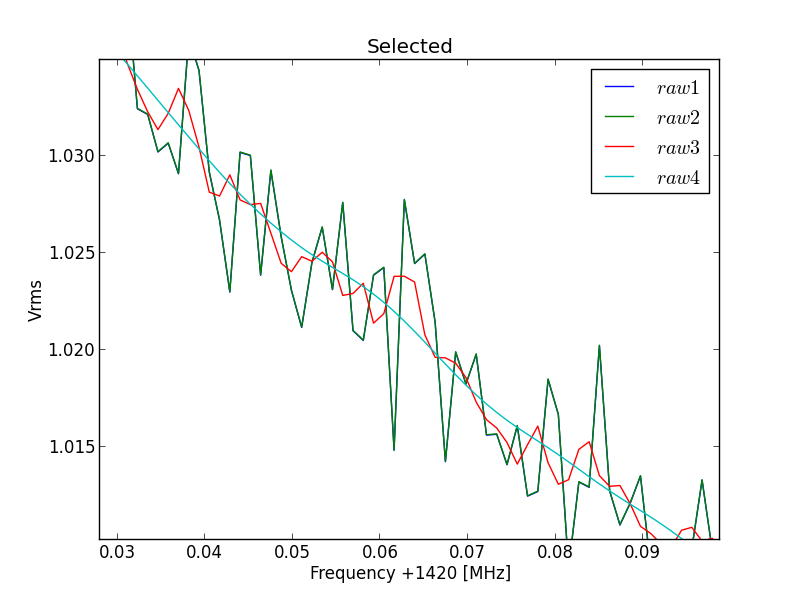 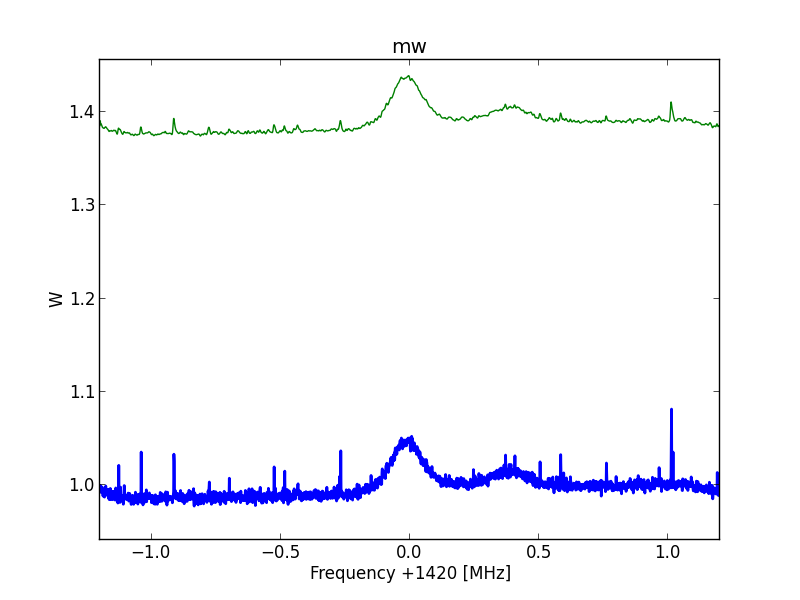 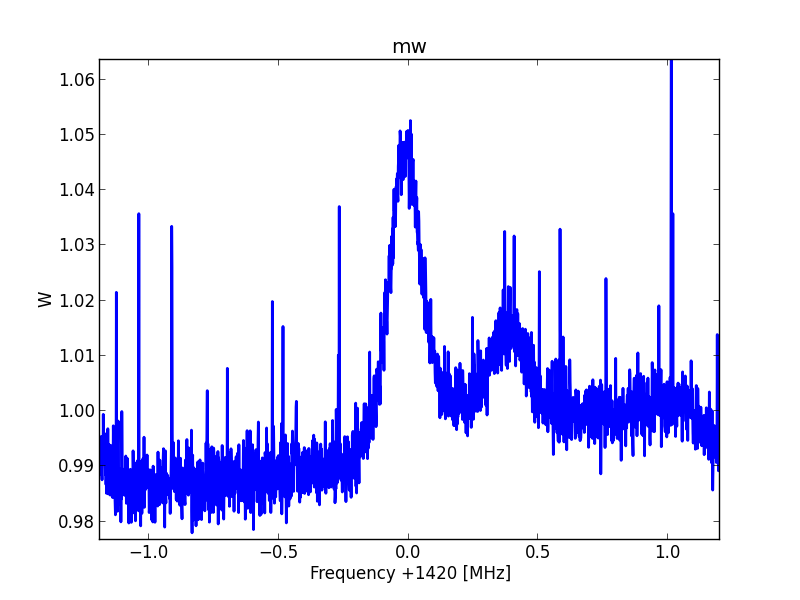 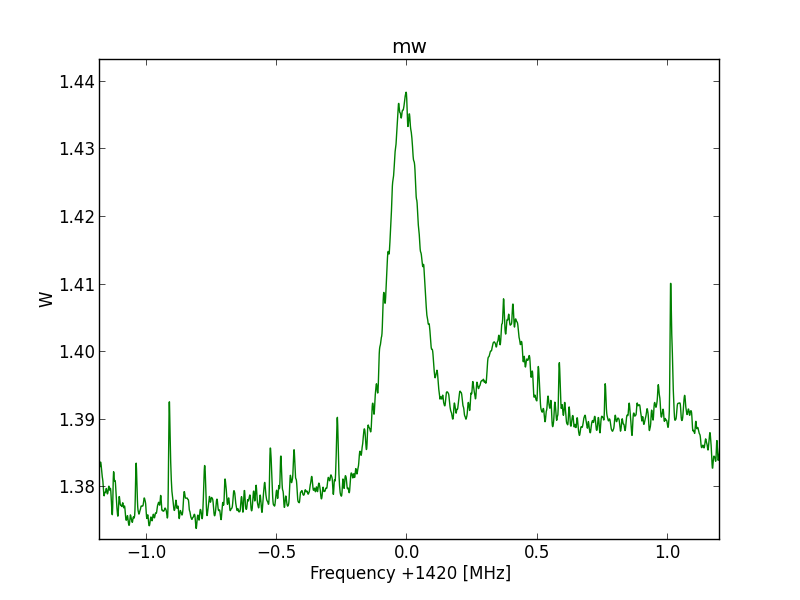 The full 24 hour data (288 data flies) can be downloaded from here; cfrad288.zip   Also the python sript is added into the zip file. Python is a free platform used in scientic and universities. It is fast and has the feel of old "Basic". The version used by us is Python-xy and can be found here https://code.google.com/p/pythonxy/wiki/Downloads; install it. Included is the an editor called "Spider".

I the editor go to the folder with the unzipped files and , open the file cfrad288.py, and run it. The reference for this 24 hour run is taken from the quiet part of the scan, this is not what we normal do, because everywhere there are hydrogen background signals, but for the moment this is easy. So the the scans 180 to 190 are taken as "zero" reference. The mean value of these scans are taken, which gives a smooth line like; 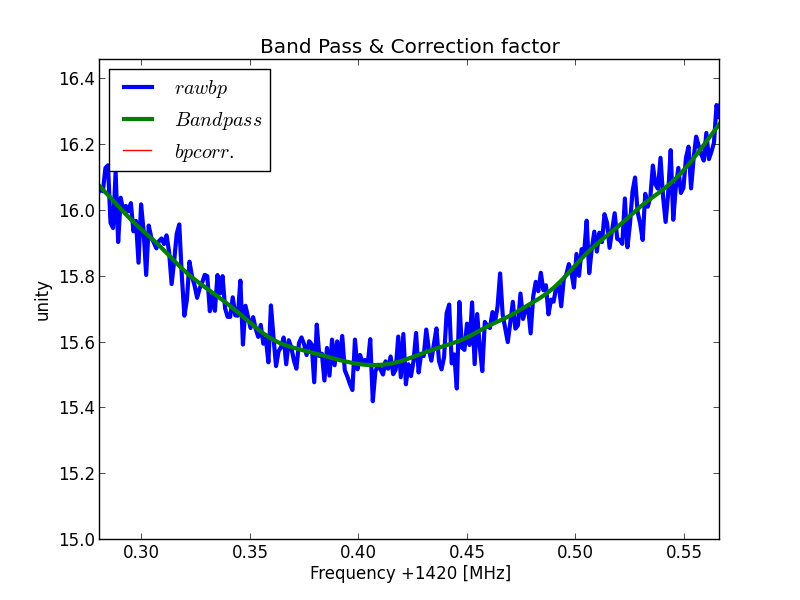 In another project we can also show the use of a polynome with multi-coefficients to fit the curve. making it even more smooth.

For now we use this curve to inverse multiply the rest of the measured files with. The script continues when the top right X is pressed. Next the selected curve is shown. Here we can judge the script lines we think of and we do not have to wait for the processing of all the files. 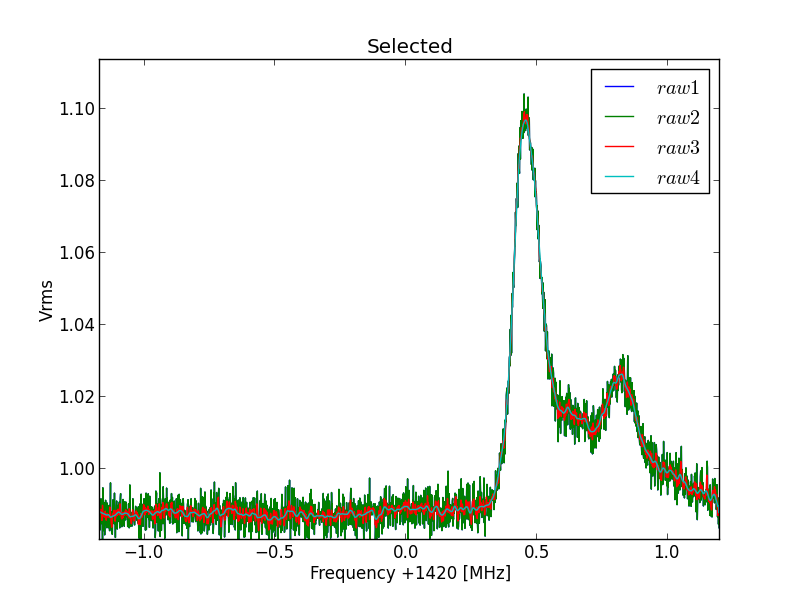 If done press X again; the complete 288 files are now being processed. 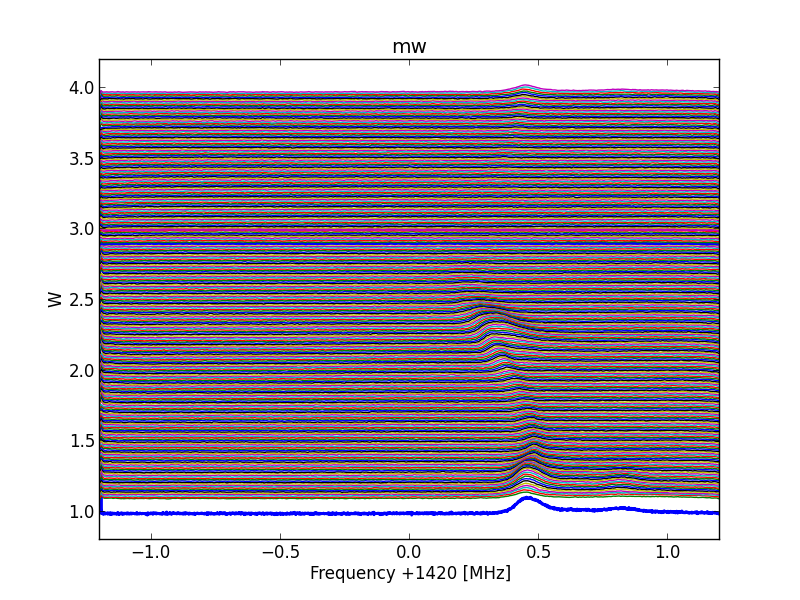 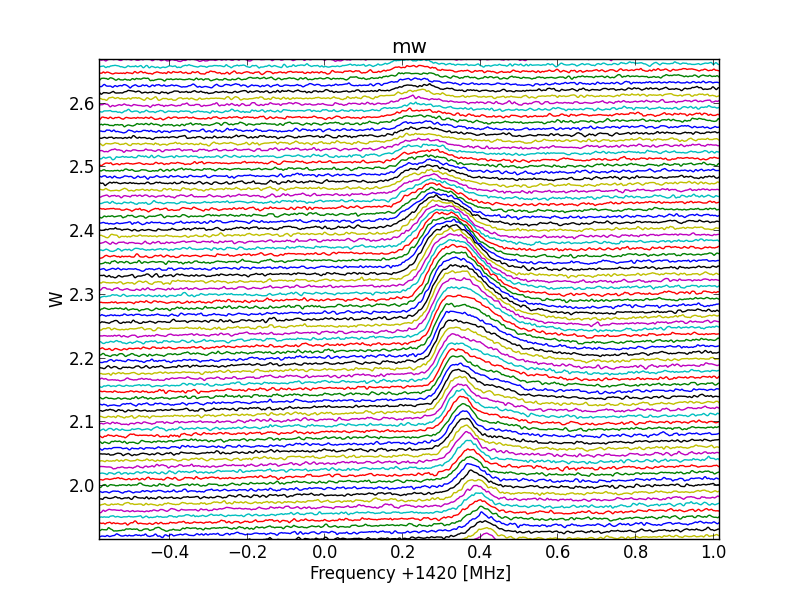 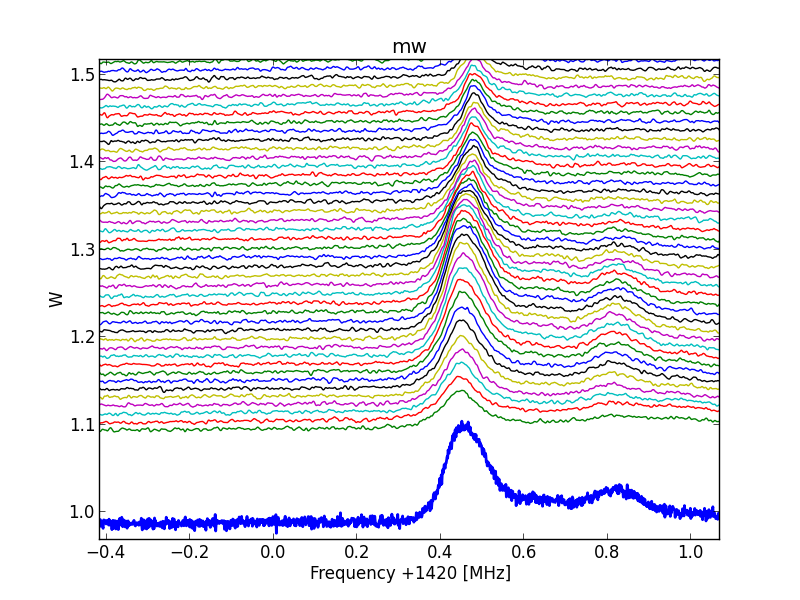 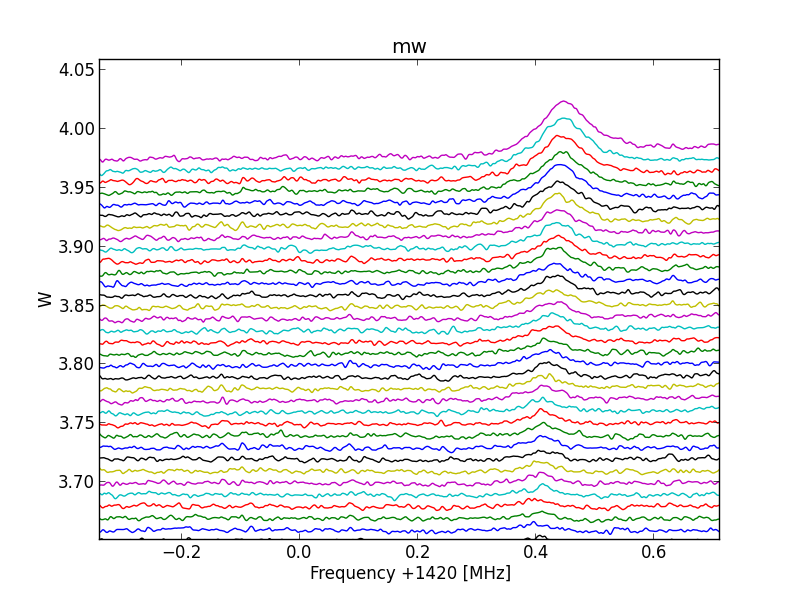 CONTOUR plot of the Cfrad files

It has taken some time, but now I have found an more easy solution to generate a contour map with python. So, now I can share this method with you also.

First, the band pass corrected nrad files (the spectra), which normally are line plotted, have to be saved to disk. This can be automated when one script command line is added to the cfrad plot script like this;

Put it at the end of the 'series' block.

Now if you run the modified plot script, all the extra .tct files will be written to disk.

Next these .tct files have to be packed into a csv file with the csv-maker.py script.

Let the cvs-maker script run. It will take a while; for 289 files about 9 minutes on a modest machine. You can check the produced .csv file; its about 18MB. When you open it with an editor like 'edit pad lite', you will see 3 columns; bin-nr, spectrum-nr, intensity-value.

Next you can use all kind of tools to plot this csv file, but you can also use 'plot-contour.py'. If you have altered the frequency range bins, then you must do some homework to adjust the frequency contour scale also.

Running this script takes about 1 minute. Below are some contour examples of the nrad288.zip files from the parac.eu download page

One of the variables you can modify in the plot script is the resolution of the levels. In the graphs you see the difference between 10, 50, and 500 levels. 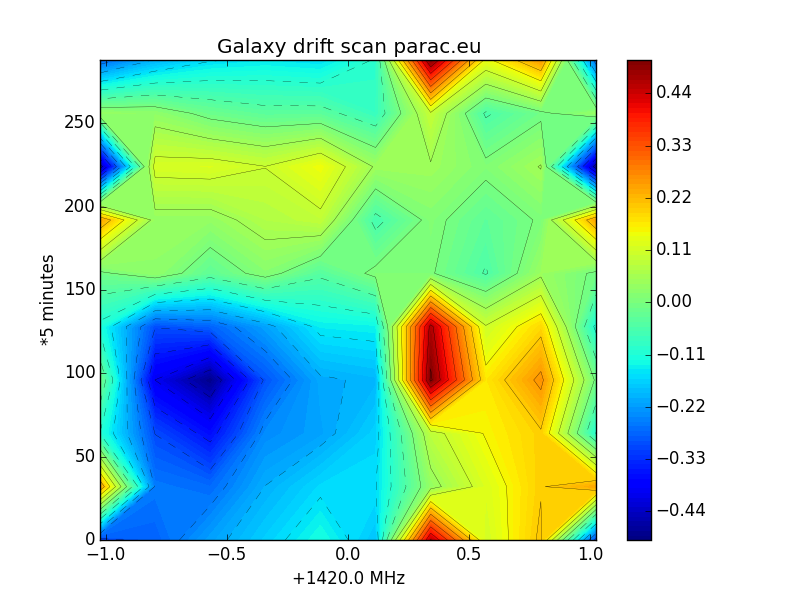 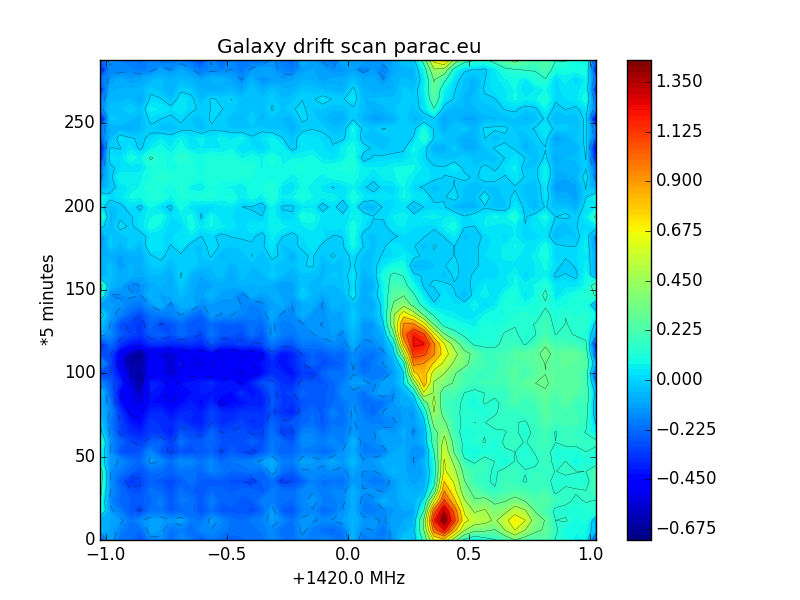 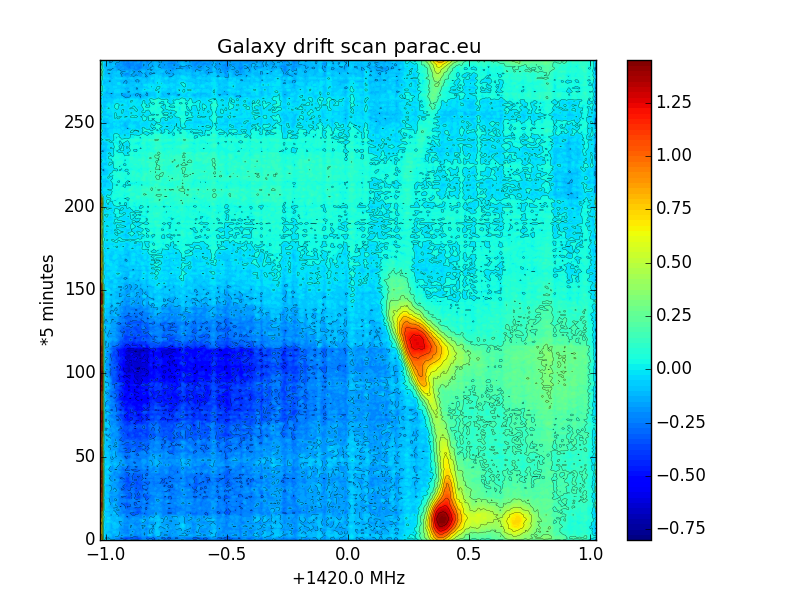