In a galaxy far far away, 31 years ago a supernova explosion happened. The intelligent beings there knew it was coming and some were hiding inside and behind the outmost planet, while another space craft was hoping to get a ride from the shockwave so they could be catapulted with 3000km/s to the next star. Here on earth we had a great show; google it.

A lot of papers were produced and one of them by Yvette Cendes (alias Andromeda321) got my attention.

Why should debris blasted off slow down and then accelerate again.

So, I read the paper. To my surpise, in the paper I only found 3 times the mentioning of "re-acceleration" in the text. Also I did not find a graph indicating that re-accelation; there is only graph fig4a of the radius size. So, I decided to do some calculation myself.

The radio data was obtained at ~9GHz; I thougt it should be thermal radiation, but it seems to be synchrotron radiation; generated when electrons spiral in magnetic field lines.

I copied from tabel5 the columns 1 and 3 to a worksheet. The SN remnant is at a distance of 51.4 kpc, but I did not convert the radius from arcsec to km.

Attached are the 3 graphs as a function of time (days since SN start).

As with other dying stars (see http://parac.eu/projectmk15.htm and ..15b), this one (before SN) also expelled shells of ever increasing mass material at about 250km/s. When the supernova happens, the shock wave ploughs trough and overtakes that material with 3000km/s.

In graphs 2 and 3 we can see the speed variation and the acceleration change. I can understand that the speed is slowing down because it ploughs through the older material, but then later the speed picks up again; why and by what. Perhaps it is speeding up because of wobly reconnecting magnetic lines when the shockwave leaves the material shells. see

Anyhow, it was an interesting exercise.

Todo; recalculate for velocities in km/s and check the numbers with the paper. 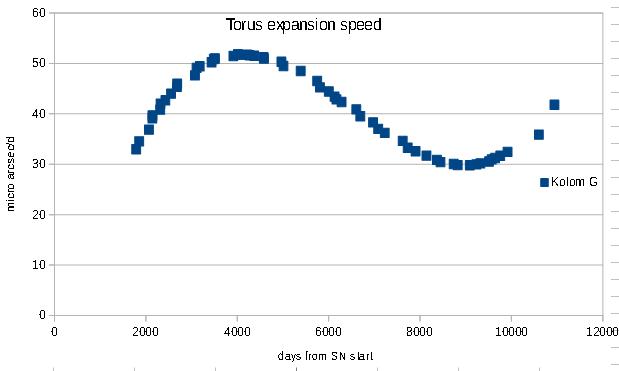 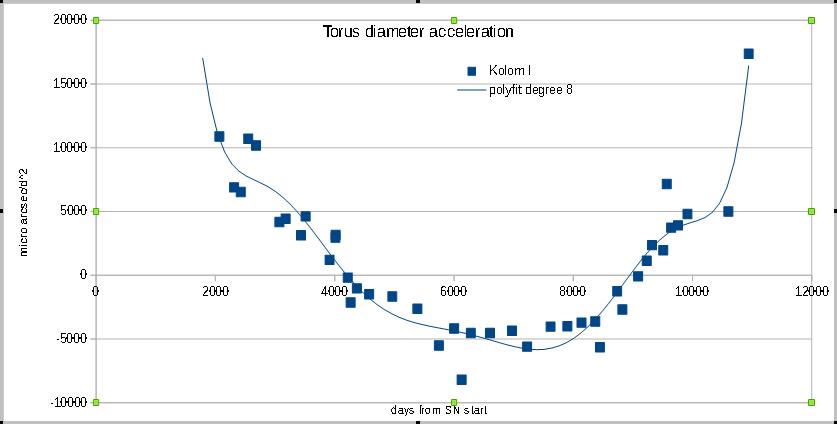