With the Sao Giao radio telescope and an Astra standard LNB we captured methanol CH3OH of the young stellar object(YSO) G188.94+0.89, see plot. In the literature it says to have a VLSR velocity of +10km/s and an intensity of 183jy. 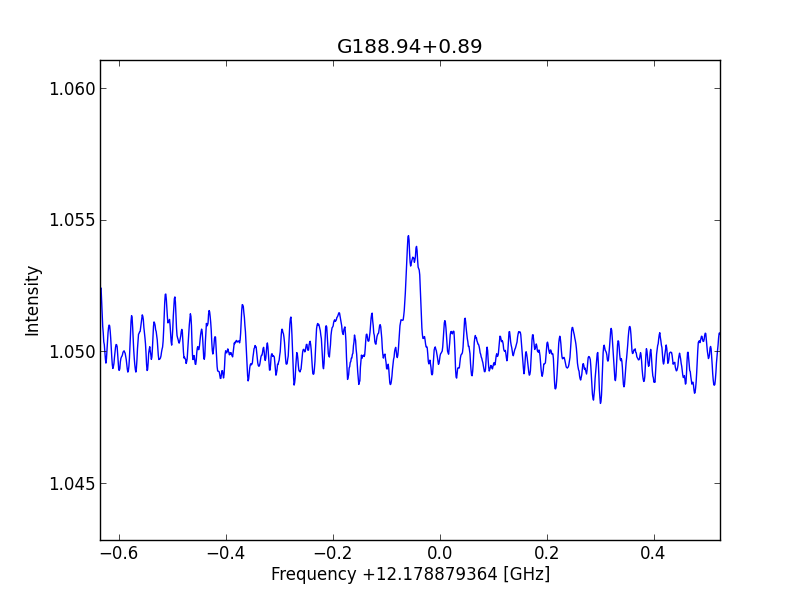 In the beginning, or you can say for a week, I did not see a result, until it was noticed that the pointing parms were E1950 and not E2000.
With the dish of 9.3m and a 0.15deg beam we were looking in the wrong direction.
So if you find a paper like below, check the pointing reference.

Next check with Sharp# for the right level and no RFI, and start your cfrad2.exe. Each line is the mean of E5 spectra written to disk.
Four summed lines (green to purple) (dish offset) are used as reference; the bottom line is the average of the 6 next lines; total 30min of integration.
When zoomed in, you can see that the left and right edges are a bit higher; these are caused by the masing of the circumstellar disk.
One side approaching and the other side is receding us.
Strong masers are mostly seen on the edge, because the column of gas is then longest and masing amplification is maximum.

When you take the frequency difference between the left and the right peak and calculate the disk rotational speed, it is low for methanol; just about 1km/s.
So, the distance to the "star to be born" must be huge, because even the rotational speed of Pluto is about 5km/s.


On ignition the star will disintegrate the gas disk cloud so only the solid clumps remain, which form planets.


Fig.5 - Evaporation of the disk gas

In the zip files I added all the referenced papers here in a zip file.

Some more info about the system.

The angle encoders are analog sin/cos resolvers wired to a 16 bit AD2S80 R/D converter.
Data is serialized by a PIC and send to a second PIC processor. The pointing sw is based on python (see http://parac.eu/projectmk8.htm) and run on a PC with inet time sync.
The 'set' data is also send to the second PIC. Monitoring/command output/input of the PIC servo software is communicated to that PC.
The second PIC with the servo sw also generates a PWM signal for both channels and send them via optocouplers out to two frequency inverters which drive the motors.
The sw servo program react to differences of 0.01 degree or more.
All software was home made. 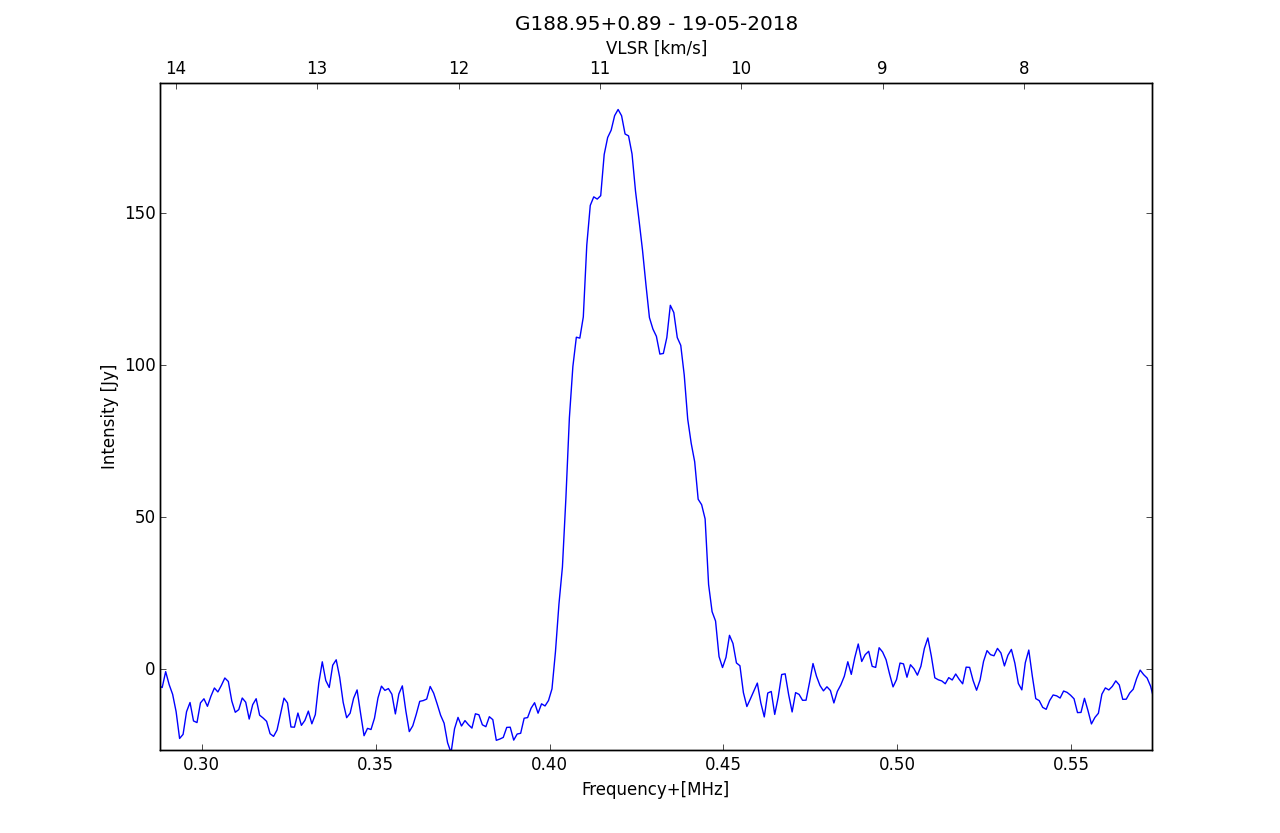 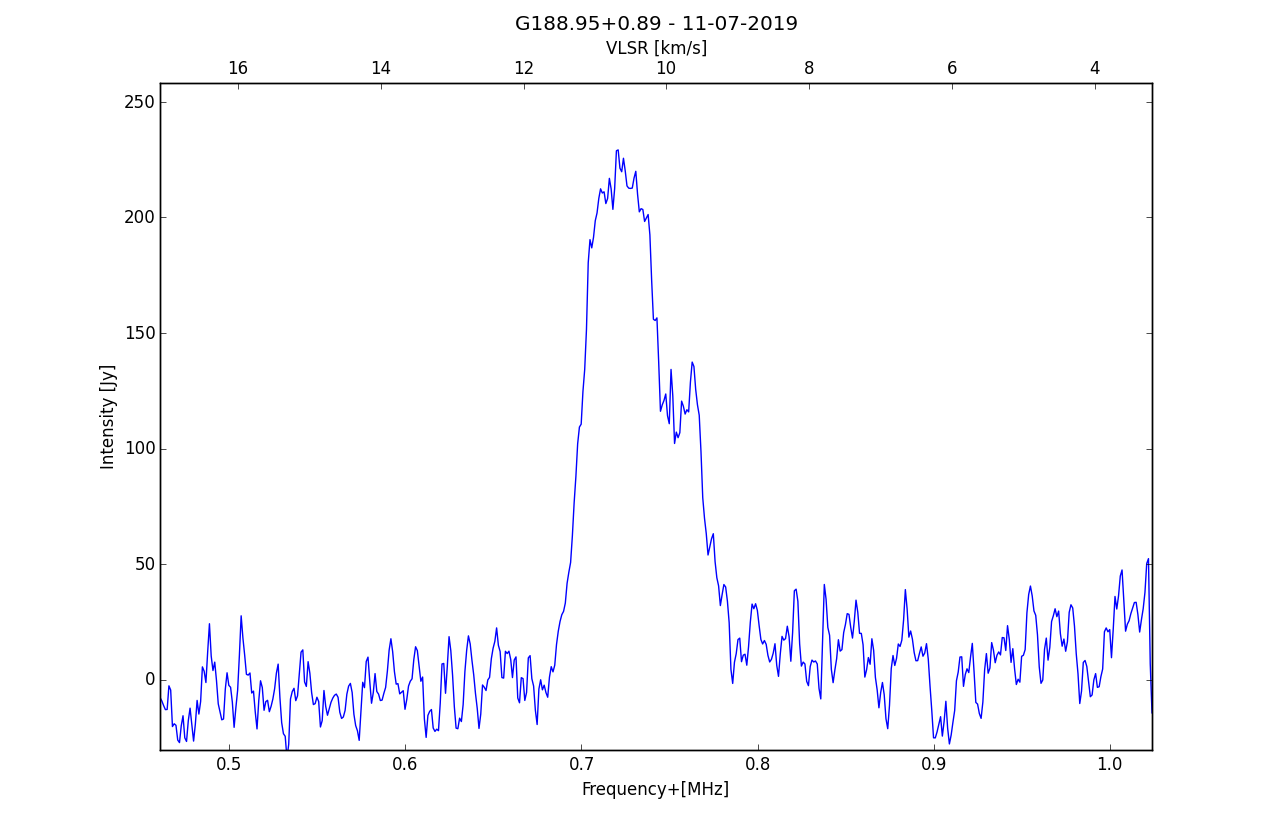 The integration time for the 2019 graph was 35 minutes.

The intensity of the G188 source is strong the last years. That has not been the case some 35 years ago.
When you look at the water maser signals on 22GHz (fig. 7), then you will see that the intensity was high during the period 1987 to 1991 and after that the signal disappeared. The intensity diplayed is on a log scale 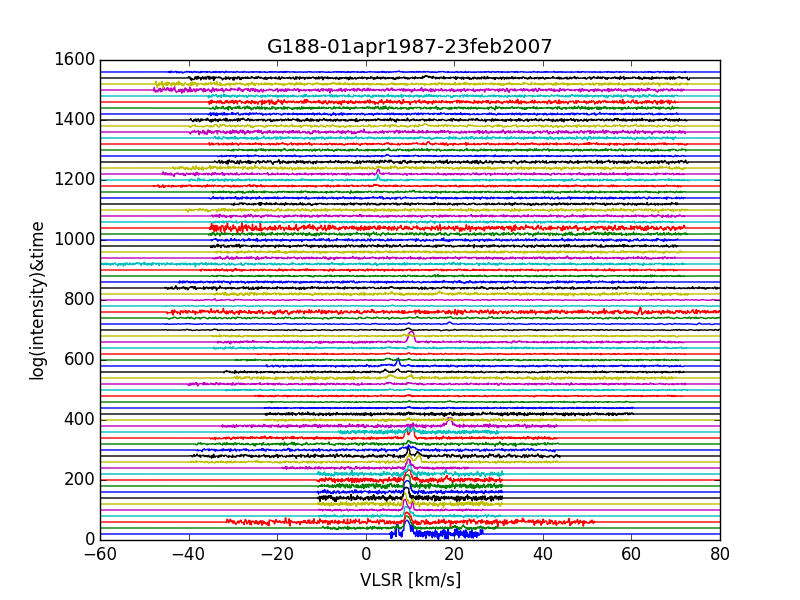 The water maser measurements were done with the Medicina Radio Telescope in Italy. Riccardo Cesaroni gave us permission for using this data.
When you look at the water maser data from the observation starting time, then you will see that the VLSR of a cloud is varying. 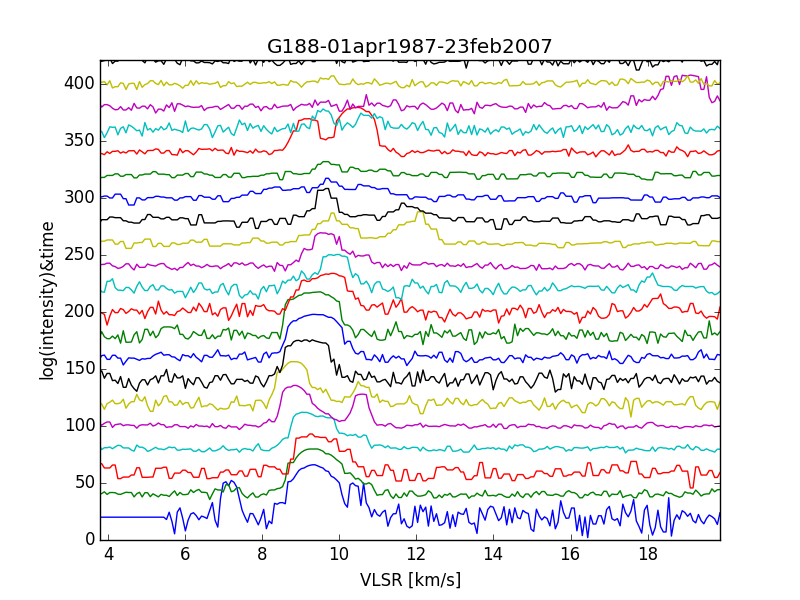 It is varying in a rhythm. The only way a cloud can do that is by circling a mass.
The orbit period time is 730 days. Comparing that to our solar system would mean an orbit between Mars and Jupiter.
Soon after however the signal disappears, except for some scattered bumps.
At this moment we we measure a strong signal again, however the amplitude of this signal modulates.
Measurements done by the South African Observatory finds a period of 416 days. You can compare this with an orbit between earth and mars.
So perhaps the original cloud from 40 years ago rotates in a high inclined orbit around the main cloud, and is heating up the mean cloud as it nears the mean cloud core donut.
However this is all speculation, but fun.